As a rural kid you learn that not everything comes past your door. I went away to school in the city and I could feel the difference. I didn’t like all of it but I liked the opportunities that seemed to present themselves. My parents had to move to a small house to keep it all going so I felt obliged to do my best. I road with Merridy to London and thrived; we spent 12 years there and had 4 children. It takes some bottle to head back to smaller places. The smaller the place, the more bottle.

Mutijulu is the furthest out of our (Congress’s) five remote clinics. I have learned all their names and some alternatives. (The Santa Teresa local names are still beyond me, but I have got Utju and Ntaria now). To get there Teena, Samarra (the team), Ann (from policy) and I take the 30 minute tourist flight west from Alice. I let some Germans have my window seat. The rain nourished African and Asian buffel grass works its tortured agar shapes as we come in to land, crowding out the bluer resident spinifex in many areas. Then there is the rock. Wow….. We get a car and drive through the park gate with a nod from Teena and the ranger. Everyone knows Teena.

Mutijulu is just to the east of Uluru where non-Aboriginal visitors gathered in the old days. Like Yulara for tourists today, Mutijulu is a centre for Aboriginal people from all around. No Sails or restaurants here for visitors though, just mats or cars as bedrooms. The population is running at about 3 times normal due to ceremony. We arrive at the clinic which is a Heath Robinson affair; disconnected, different parts in different styles, lean-tos and dongas tied together with electricity cables, all donning a modern shattered solar panel which has a pram on it! All this wrapped up in high fencing including a car park and a cage for the ambulance bay which leak with neat round human-sized holes at regular intervals. It looks like something from the war in the Iraq.

We meet the staff. A nod and a wry smile from Maria, the new clinic manager. She takes an angle on life which is not familiar. She has worked as a remote nurse for many years, diluting her angled Italian features with flavours from far flung places. A pair of sidelocks hang on each side of her friendly face like Hasidic payots. She is new here and an unknown to Sinead, a tall Irish nurse and midwife who has been working in remote and deprived parts of the world forever. They have two colleagues who are relieving for a while. Dr Julie is here too. She is an experienced remote doctor who survived taking care of the victims of the boat disaster on Christmas Island in 2010. She lives in Yalara with her husband who is the Park Ranger. Robby and his sister are working here; two locals who really know what is going on. Robby is busy with ceremony and his sister chats about how things are going. So many people wandering around town, awake all night, playing cards and having fun. Some break ins and damage by some of the young people. The shop too.

Robby has started training as an Aboriginal Health Practitioner and will be in Alice in a few weeks. I help with some stuff I promise not to talk about. It changes my view of myself as Australian, like my brain grew a little, pressing on my skull.

The toilet is blocked so patients have to use the one entered through the doctor’s room. You can hear and smell the consequences – sometimes there is a rush into the room and an accident. Dr Julie is not sure how long she can take it. The blocked toilet is part of the Heath Robinson construction with drains added to drains. It’s not going away. Bob the (local) builder charges $400 to clear it but it blocks again. It makes everything I take for granted seem so fragile and temporary.

We drive to dinner in Yulara and pass the Mutijulu swimming pool which is exploding with golden spray and gleaming children as we squint against the massive setting desert sun. The rock provides mood lighting above its recent rain nourished green beard.

The staff, like the locals from Mutijulu, are not allowed to drink at Yulara as Mutijulu is a prescribed community under the rules of the Intervention. This is not law but regulation to prevent upsetting tourists with intoxicated locals. Take-away alcohol is illegal. Sitting in the excellent restaurant we have many young Aboriginal people serving fine food and we hear about Sinead’s life. From Ireland to Africa to Canada and all over then to Australia and Mutijulu. She has been a fierce advocate for home birth, particularly in Canada where she did her midwifery training and her remote practice. We share a lot of heroes including Yehudi Gordon and Janet Balaskus who took care of Merridy and I when our children were born. The day I spent with Michel Odent is interesting to her. We share birthing stories – her’s are far more exotic than my London and Darwin homebirth stories. Respect.

I work as the Malpa that night, supporting Sinead on a call out. Two staff have to go to every call-out now due to a recent murder of a nurse in the PTY lands to the south west. Sinead works her web of magic with the family, slowly carefully, showing mother, aunty and grandmother care and attention. The febrile child settles and heads home in arms, cooler for the outing.

I vow to do what I can to get everyone I know to contribute to getting a beautiful clinic at Mutijulu, a place that reflects the values of our Board and managers. It is, after all, our most visible remote community and should reflect in part the offerings we make to our overseas visitors, many of whom have made less effort to get here than their Aboriginal shadows behind the grand ol’ rock. Now that’s a job. 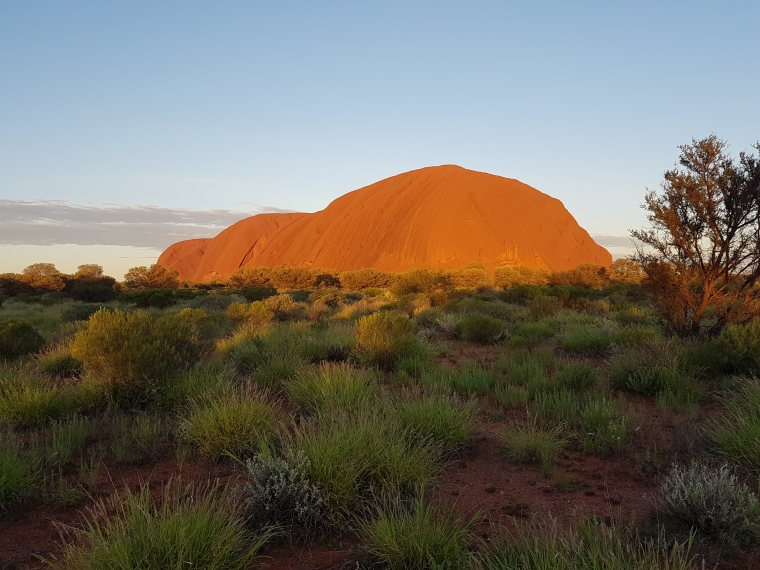